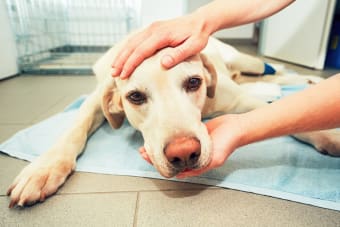 Epilepsy in dogs is a frightening condition, as no pet owner wants to witness their pup having a seizure. Here, our Vancouver vets discuss epilepsy in dogs including the symptoms and how it is diagnosed and treated.

Symptoms of Epilepsy in Dogs

In dogs as with humans, epileptic seizures are caused by abnormal electrical activity in the brain. There are three types of seizures that your pet can experience, and each type of seizure displays different symptoms.

If your dog experiences a seizure of any kind, immediately seek emergency veterinary care.

Focal Seizures occur within small regions of only one-half of the dog's brain. If your dog is experiencing a focal seizure, the symptoms that you see will depend upon which region of the brain is affected.

Epilepsy is a neurological condition that some dogs are born with, and as of yet there is no cure, however, treatments are available.

A dog may be diagnosed as having a reactive seizure, which is a seizure in response to a temporary problem such as poisoning. Reactive seizures will stop once the underlying problem is cleared up.

Since there is no cure for epilepsy in dogs, treatment with anti-epileptic drugs (AED) will be focused on reducing the severity and frequency of your dog's seizures without causing unacceptable side effects. This approach is successful in approximately 15-30% of dogs.

Following a thorough examination, testing, and diagnosis, your vet or veterinary neurologist will prescribe the best medication for your dog based on the type of seizures your dog is experiencing as well as your dog's overall health, size, and age.

If the first drug is unsuccessful at controlling your pet's epilepsy other drugs may also be tried.

If your pet is taking medication to help control seizures it's important to administer the meds at the same time every day, be sure to give them the correct dose prescribed by your vet, and never discontinue the medication without first consulting your veterinarian.

The Success of Epilepsy Treatment in Dogs

How do you know if the treatment is working? Treatment is considered successful if you notice that your dog is having notably fewer seizures than before and that they are shorter or less severe. Generally, the overall goal is to reduce the incidence of seizures to about half.

Diet For Dogs With Epilepsy

Studies have shown that diet can play a key role in helping to control epilepsy in dogs. If your dog is being treated for epilepsy it is important not to change what they eat without consulting your vet first. Changes in what and when your dog eats can affect how well the anti-epileptic drugs work. This includes feeding random table scraps or giving treats to your dog. When it comes to controlling epilepsy, consistency in your dog's diet is key.

There have also been promising results in controlling seizures in dogs with a special diet. Dogs that are switched over to a diet that is rich in medium-chain triglycerides (MCT) often see a decrease in the number and severity of their seizures. Your vet may prescribe a special food to help control your dog's epilepsy.

If you feel that diet plays a role in your pet's epilepsy, speak to your veterinarian about the right food for your dog.

Living With a Dog With Epilepsy

Many concerned pet parents wonder if they will be able to leave their dog home alone. The fact is, that even the most adoring pet parent will need to go out at some point. If your dog experiences seizures the best thing to do when you leave the house is to make sure that your pet is in a safe and comfortable space so that if a seizure does occur while you are out your dog will be as safe as possible.

Note: The advice provided in this post is intended for informational purposes and does not constitute medical advice regarding pets. Please make an appointment with your vet to accurately diagnose your pet's condition.

Is your dog experiencing seizures or has been diagnosed with epilepsy? Contact our Vancouver vets today to get your pup the care they need.

Columbia River Veterinary Specialists is accepting new patients by referral and for emergency services. Our experienced emergency vets  and specialists are passionate about the health of Vancouver companion animals. Ask your vet today about a referral.